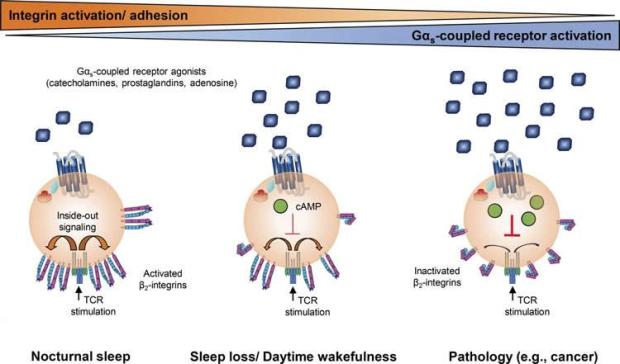 This diagram shows how the effects of Gαs-coupled agonists on T cells can be influenced by sleep or disease. NeuroscienceNews.com image is credited to Dimitrov et al., 2019.

A new study reports sleep can help immune cells attach to targets and help fight infection. The study reveals how sleep assists the body in fighting infections, whereas conditions like chronic stress can make the body more susceptible to illness.

Researchers have demonstrated that physical coordination is more beneficial in larger groups.

Scientists have identified a small set of molecules that can convert glial cells into new neurons. The finding could help develop new treatments for Alzheimer’s disease and brain injuries.

The first population-level study on the link between gut bacteria and mental health identifies specific gut bacteria linked to depression and provides evidence that a wide range of gut bacteria can produce neuroactive compounds. Jeroen Raes (VIB-KU Leuven) and his team published these results today in the scientific journal Nature Microbiology.

A new study reports unexpected changes in music activates the nucleus accumbens, providing reward and helping us to learn about the music as we listen.

Researchers reveal the different cognitive styles of creative and analytical thinkers are a result of fundamental differences in neural activity that can be observed when people are not working on a problem.

Finally this week, a new study reports fluvoxamine, an antidepressant used to treat OCD appears to be effective in stopping sepsis.