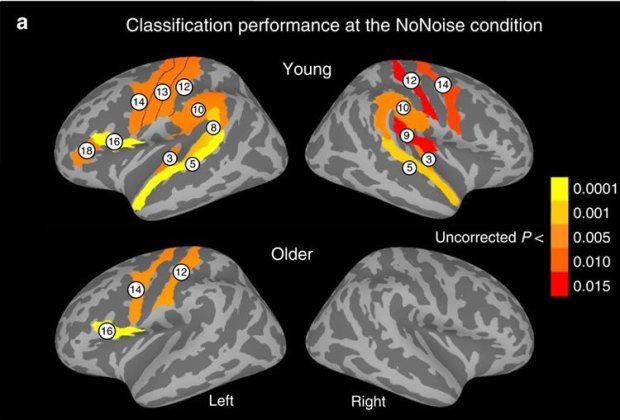 Regions with significant phoneme classification at the NoNoise condition for each group. NeuroscienceNews.com image is credited to the researchers/Nature Communications.

Researchers have pinpointed the specific part of the brain that older adults rely on to differentiate speech sounds in background noise, which could revolutionise the treatment of hearing loss.

New research has identified how cells protect themselves against ‘protein clumps’ known to be the cause of neurodegenerative diseases including Alzheimer’s, Parkinson’s and Huntington’s disease.

Transcranial alternating current stimulation may help to improve memory when targeted to a specific kind of brain activity achieved during sleep.

Researchers in the US and Australia have made a breakthrough discovery in the international quest to discover a new and potentially effective vaccine targeting the pathological proteins associated with Alzheimer’s disease.

A new study identifies different brain regions that become active when a strategy of categorisation is applied.

Researchers have developed a new machine learning system that analyses the entire human genome to predict which genes may cause autism spectrum disorder, raising the number of genes that could be linked to the disorder from 65 to 2,500.

Results from a study published in the online publication Nature Genetics finds 15 genomic regions that are significantly associated with a diagnosis of depression.

According to researchers, age related changes in the organization of neural networks when performing short term memory tasks may help to compensate for other aspects of brain aging.

Genetic changes associated with Parkinson’s disease have been found in liver, fat, immune and developmental cells, a new study reports.

Finally this week, a new study suggests regular physical activity may lead to greater hippocampal volume and could stave off dementia, especially in older people.