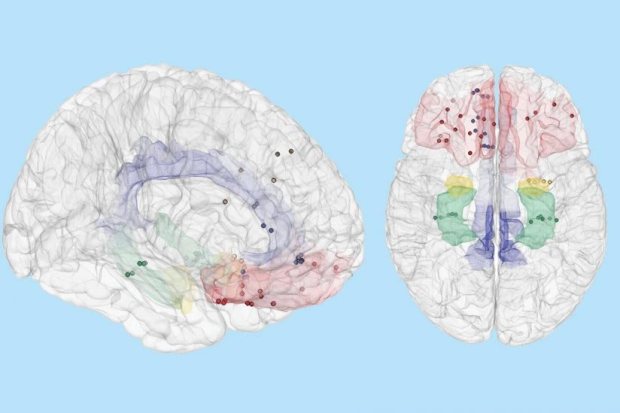 Mood is represented across multiple sites in the brain rather than localized regions, which makes decoding them a computational challenge, according to a USC expert. NeuroscienceNews.com image is credited to Sani et. al., Nature Biotechnology.

Researchers have built a decoder which is able to translate neural signals into mood variations.

How and why human-unique characteristics such as highly social behavior, languages and complex culture have evolved is a long-standing question. A research team led by Tohoku University in Japan has revealed the evolution of a gene related to such human-unique psychiatric traits.

An inhaled form of a high blood pressure medication has potential to treat certain types of anxiety as well as pain, according to a new study by the Centre for Addiction and Mental Health (CAMH).

A new blood test can help identify your body’s precise internal time clock in relation to external time. Researchers say the test could help examine the impact of misaligned circadian clocks in a wide range of diseases.

Researchers report a neural network called the isthmic system helps us to select visual objects that catch our attention.

According to researchers, drumming for an hour a week helps improve learning at school for children on the autism spectrum. The study reports drumming not only improves dexterity, rhythm and timing for those with ASD, it also helps improve concentration and enhances communication with peers.

A new study reports those with ADHD are at an increased risk of developing Parkinson’s disease.

In one of the biggest breakthroughs in schizophrenia research in recent times, Professor Cynthia Shannon Weickert from Neuroscience Research Australia (NeuRA) and UNSW Sydney has identified immune cells in greater amounts in the brains of some people with schizophrenia.

Finally this week, esearchers are looking at what happens in the brain when we make snap decisions under stress.