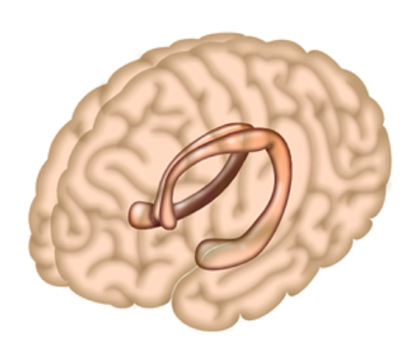 The hippocampus is a region of the brain largely responsible for memory formation. Credit Salk Institute.

Scientists have created a new model of memory that explains how neurons retain select memories a few hours after an event. This new framework provides a more complete picture of how memory works, which can inform research into disorders liked Parkinson’s, Alzheimer’s, post-traumatic stress and learning disabilities.

A switch in the brain of people with epilepsy dictates whether their seizures will be relatively mild or lead to a dangerous and debilitating loss of consciousness, Yale researchers have found.

By predicting our eye movements, our brain creates a stable world for us. Researchers used to think that those predictions had so much influence that they could cause us to make errors in estimating the position of objects. Neuroscientists at Radboud University have shown this to be incorrect. The Journal of Neuroscience published their findings – which challenge fundamental knowledge regarding coordination between brain and eyes.

Extreme and traumatic events can change a person — and often, years later, even affect their children. Researchers have now unmasked a piece in the puzzle of how the inheritance of traumas may be mediated.

Artists have structurally different brains compared with non-artists, a study has found. Participants’ brain scans revealed that artists had increased neural matter in areas relating to fine motor movements and visual imagery. The research, published in NeuroImage, suggests that an artist’s talent could be innate. But training and environmental upbringing also play crucial roles in their ability, the authors report.

Certain errors in visual perception in people with schizophrenia are consistent with interference or ‘noise’ in a brain signal known as a corollary discharge, a new study shows.

Finally this week,  a recent study has shown that use of abstract gestures is a powerful tool for helping children understand and generalize mathematical concepts.