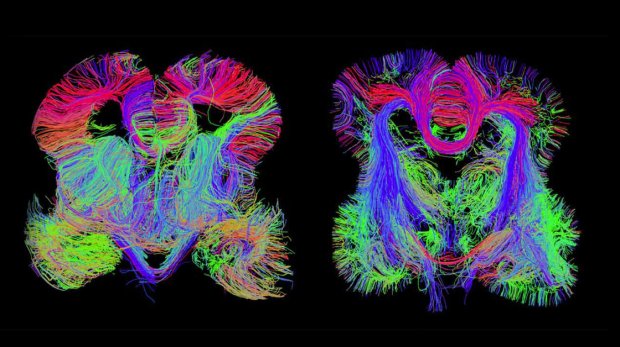 A high-resolution map of the human brain in utero is providing hints about the origins of brain disorders including schizophrenia and autism.

The map shows where genes are turned on and off throughout the entire brain at about the midpoint of pregnancy, a time when critical structures are taking shape. The human brain is often called the most complex object in the universe. Yet its basic architecture is created in just nine months, when it grows from a single cell to more than 80 billion cells organized in a way that will eventually let us think and feel and remember.

Having a map like this is important because many psychiatric and behavioral problems appear to begin before birth, even though they may not manifest until teenage years or even the early 20s.

The resulting map, which is available to anyone who wants to use it, has already led to at least two important findings. The first is that many genes that are associated with brain disorders are turned on early in development, which suggests that these disorders may have their origin from these very early time points.

And the map tells researchers who study these disorders where in the brain they should be looking for signs of trouble. For example, the map shows that genes associated with autism appear to be acting on a specific type of brain cell in a part of the brain called the neocortex. That suggests we should be looking at this particular type of cell in the neocortex, and furthermore that we should probably be looking very early in the prenatal stages for the origin of autism.