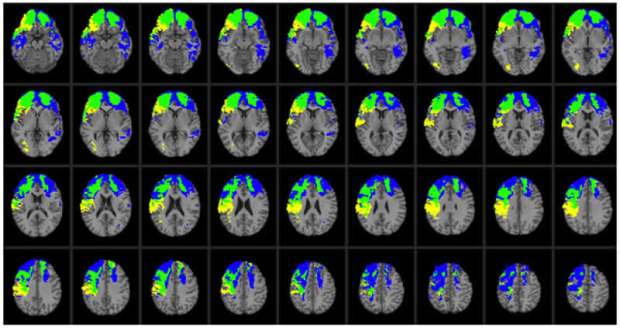 Lesion overlap map illustrating common and distinctive brain regions for Val/Val (blue) and Val/Met (yellow) genotype patients. Overlap between Val/Val and Val/Met genotype patients is illustrated in green. In each axial slice, the right hemisphere is on the reader’s left – this is because the view is from the bottom i.e. as if one were in the neck looking up at the brain. Credit Barbey et al./PLOS ONE.

Researchers report that one tiny variation in the sequence of a gene may cause some people to be more impaired by traumatic brain injury (TBI) than others with comparable wounds.

A recent study conducted by a multicenter-research team led by Cedars-Sinai Medical Center used a new, automated imaging system to identify shrinkage of a mood-regulating brain structure in a large sample of women with multiple sclerosis (MS), who also have a certain type of depression. The research supports earlier studies suggesting that the hippocampus may contribute to the high frequency of depression seen in those who suffer from MS.

Max Ortiz Catalan, researcher at Chalmers University of Technology, has developed a new method for the treatment of phantom limb pain (PLP) after an amputation.

A University of Sydney study is looking into the effectiveness of omega-3 supplements and the antidepressant, sertraline, in reducing depressive symptoms and cognitive decline in older people, in a bid to prevent the onset of depression and dementia in later life.

Certain neurons in the human striatum—a brain region involved in movement and cognition—are renewed throughout life, according to a study published in Cell.

Researchers at the University of Oxford have discovered the molecular switch in the brain that sends us to sleep.