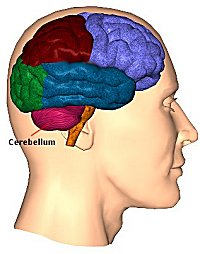 Researchers believe they found a link between the volume of one’s cerebellum and general intelligence. The cerebellum is involved in the coordination of voluntary motor movement, balance and equilibrium and muscle tone. It is located just above the brain stem and toward the back of the brain.

A small but promising study suggests that magnetic stimulation of the brain could aid the recovery of some stroke patients.

Treatment that increases brain levels of an important regulatory enzyme may slow the loss of brain cells that characterizes Huntington’s disease (HD) and other neurodegenerative disorders.

How much do babies remember about the world around them? New research reveals that even though infants can’t remember the details of an object that has been hidden from view, their brains have built-in “pointers” that help them retain the idea that the object still exists even though they can’t see it anymore.

Loyola University Medical Center researchers are reporting what could become the first reliable method to predict whether an antidepressant will work on a depressed patient.

How we perceive motion is a significantly more complex process than previously thought, researchers at New York University’s Center for Neural Science, Stanford University and the University of Washington have found. Their results, which appear in the journalCurrent Biology, show that the relationship between the brain and visual perception varies, depending on the type of motion we are viewing.

After birth, the developing brain is largely shaped by experiences in the environment. However, neurobiologists at Yale and elsewhere have also shown that for many functions the successful wiring of neural circuits depends upon spontaneous activity in the brain that arises before birth independent of external influences.