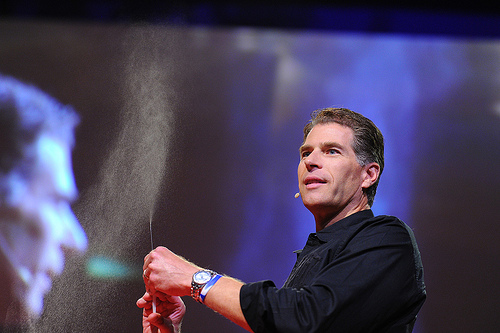 Dr Paul Zak, a neuroeconomist, investigates the neurophysiology of economic decisions. His research at the Center for Neuroeconomics Studies  draws on economic theory, experimental economics, neuroscience, endocrinology, and psychology to develop a comprehensive understanding of human decisions.

Dr Zak also studies why we humans like and trust each other. And the answer, he’s found, is the compound oxytocin. In this photo above, Zak has brought a syringe loaded with oxytocin onstage, to create a striking visual aid by atomizing it into the air (now that’s what I call a prop!)

Oxytocin – the cuddle chemical – is a hormone made in the hypothalamus – a structure at the base of the brain involved in regulating strong emotions. Research has shown that behaviours necessary for developing long-term relationships such as hugging, kissing and skin-to-skin contact – trigger the release of this hormone into the blood and as the romantic attachment increases so does the amount of oxytocin circulating in the body.  In fact, it is suggested that this hormone ‘primes’ the brain to fall in love by acting on the brain to increase trust and reduce fear, increase empathy and generosity and increase attachment and bonding. For this reason oxytocin is sometimes called the cuddle chemical.  Some drug companies have considered putting oxytocin into perfumes and sprays  – to help attract a mate.