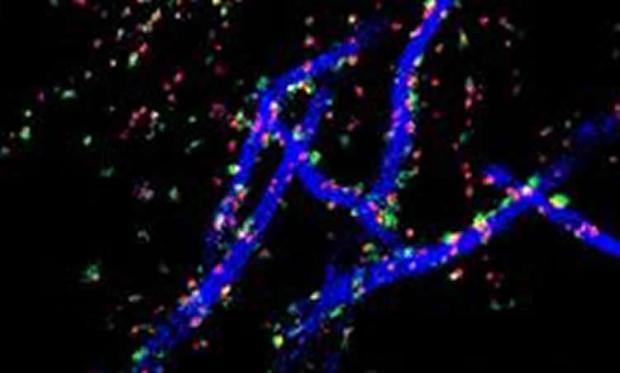 Axon initial segments (blue) and the synapses that form along them (red and green) are shown. Image credit: Winnie Wefelmeyer/MRC Centre for Developmental Neurobiology.

A new study characterises a novel way in which neurons remain electrically stable when confronted with chronic increases in neuronal activity.

Lithium chloride which is used as a mood stabiliser in the treatment of mental health problems, mainly bipolar disorder, could be used to treat arthritis according to a new study.

New research indicates that adults born very premature are more likely to be socially withdrawn and display signs of autism.

Scientists have found that existing anti-malaria drugs could be a potential treatment for Parkinson’s disease.

A number of studies presented at the Alzheimer’s Association International Conference, showed that regular supervised exercise sessions could help to improve symptoms in people with memory problems and dementia.

Brain scans of war veterans with posttraumatic stress disorder have led researchers to an area of the prefrontal cortex that appears to be a good predictor of response to treatment with SSRIs–the first-line drug treatment for PTSD.

New research findings show that body fat can send a signal that affects the way the brain deals with stress and metabolism.

Increasing the levels of a signaling molecule found in the brain can positively alter response to stress, revealing a potential new therapeutic target for treatment of depression.

Researchers have, for the first time, determined the rate at which the developing brain eliminates unneeded connections between neurons during early childhood.

Scientists have identified a critical function of what they believe to be schizophrenia’s “Rosetta Stone” gene that could hold the key to decoding the function of all genes involved in the disease.

Researchers have discovered a link between autism and genetic changes in some segments of DNA that are responsible for switching on genes in the brain.

Infants can use their expectations about the world to rapidly shape their developing brains, researchers have found.

Finally this week, there’s new evidence suggesting that women’s brains are especially vulnerable to Alzheimer’s disease and other problems with memory and thinking.