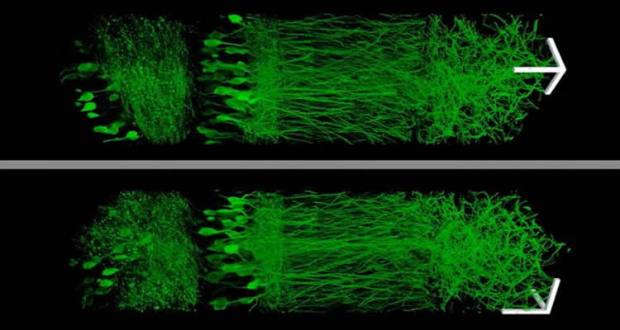 Using a new technique that allows them to enlarge brain tissue, MIT scientists created these images of neurons in the hippocampus. Image credit: Fei Chen and Paul Tillberg

A team of researchers has taken a novel approach to gaining high-resolution images; they have discovered a method that enlarges tissue samples by embedding them in a polymer that swells when water is added. This allows specimens to be physically magnified, and then imaged at a much higher resolution.

Scientists have captured the exact point and time when information is exchanged between brain cells, a breakthrough that could explain how and why neurological conditions like schizophrenia or epilepsy occur. And rather than being a single condition, new research published in the American Journal of Psychiatry suggests that schizophrenia may be a group of eight genetically different diseases – each with their own symptoms.

Research from the Center for Vital Longevity at The University of Texas at Dallas has shed new light on which cognitive processes tend to be preserved with age and which ones decline.

The brains of some Iraq and Afghanistan combat veterans who survived blasts from improvised explosive devices (IEDs) and died later of other causes show a distinctive honeycomb pattern of broken and swollen nerve fibers throughout critical brain regions, including those that control executive function. The pattern is different from brain damage caused by car crashes, drug overdoses or collision sports, and may be the never-before-reported signature of blast injuries suffered by soldiers as far back as World War I.

Our brains can be electrically “tuned” to enable us to find what we’re looking for, even in a crowded and distracting scene, new research indicates.

Finally this week, higher cognitive skills are found in the children of mothers who are consistently able to support the development of their baby’s sense of autonomy, according to a study led by researchers at the University of Montreal.