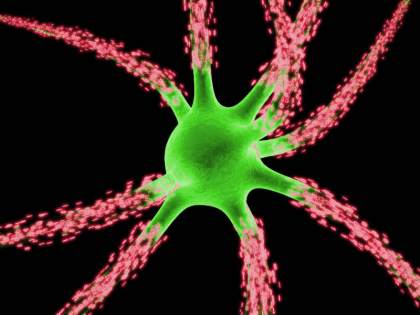 The theory and experimental findings showed that fast Hebbian and slow homeostatic plasticity work together during learning, but only after each has independently assured stability on its own timescale. This image is for illustrative purposes only. Credit Nicolas P. Rougier.

Complex biochemical signals that coordinate fast and slow changes in neuronal networks keep the brain in balance during learning, according to an international team of science researchers.

An imaging study by Stanford University School of Medicine investigators has found distinct differences between the brains of patients with chronic fatigue syndrome and those of healthy people. The findings could lead to more definitive diagnoses of the syndrome and may also point to an underlying mechanism in the disease process.

Breakdown in gut barriers to bacteria may promote inflammation and craving in alcoholics.

Seizures and migraines have always been considered separate physiological events in the brain, but now a team of engineers and neuroscientists looking at the brain from a physics viewpoint discovered a link between these and related phenomena.

All physical activity benefits the brain. This is the main message of a new study that compared the effects of different kinds of exercise on cognition in older adults.

Finally this week, certain meditation techniques can promote creative thinking, even if you have never meditated before. This is the outcome of a study by cognitive psychologist Lorenza Colzato and Dominique Lippelt at Leiden University, published in Mindfulness.