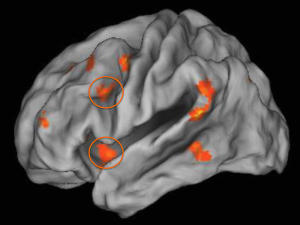 Childhood poverty impacted how much the two regions of the prefrontal cortex (as shown in orange circles) were engaged during emotion regulation. (Credit: University of Illinois at Chicago College of Medicine)

Childhood poverty and chronic stress may lead to problems regulating emotions as an adult, according to research published online in the Proceedings of the National Academy of Sciences.

New research shows that one of the brain’s fundamental self-protection mechanisms depends on coordinated, finely calibrated teamwork among neurons and non-neural cells knows as glial cells, which until fairly recently were thought to be mere support cells for neurons. The study, which has implications for understanding neurodegenerative diseases, stroke, and other nervous system disorders, adds to a growing body of evidence that glial cells are integral to brain function.

Researchers at higher education institutions have identified six proteins in spinal fluid that can be used as markers for Alzheimer’s disease. And another study suggests that older adults who don’t sleep well have more of the brain plaques that are hallmarks of Alzheimer’s.

Researchers from the Centre for Functional Resonance Imaging of the Brain (FMRIB) at the University of Oxford in the UK, say through monitoring patients’ brain waves while under anesthetic, they were able to pinpoint degrees of consciousness dependent on the doses of anesthetic administered.

Finally, this week, a new study from the UCLA School of Nursing shows that the body’s autonomic responses — the controls that impact such functions as blood pressure, heart rate and sweating — are weaker in people with obstructive sleep apnea but are even more diminished in women.

One thought on “Weekly Neuroscience Update”