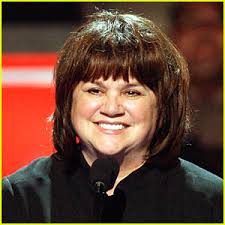 Singer Linda Rondstadt has recently been diagnosed with Parkinson’s disease.

The news that Linda Ronstadt has lost her powerful voice after a four-decade singing career as a result of Parkinson’s disease shocked not just the singer, but her many fans.

The 67-year-old Grammy-winning singer revealed last week that she struggled with symptoms of the disease for nearly eight years before getting her diagnosis just months ago. The neurological degenerative condition robs sufferers of their speech, mobility and their cognitive abilities.

During my career, I have spent almost 30 years investigating the effects of Parkinson’s disease on the brain and  I have seen great strides in our understanding and treatment of this illness.

What is Parkinson’s disease?

The disease is associated with three major symptoms (i) akinesia – an inability to start a movement – for instance when starting to brush your teeth, (ii) bradykinesia – an excessive braking or slowing of movement – when the brush strokes become shorter and eventually freeze and (iii) tremor – starting out as a trembling finger movements as if rolling a coin or pill – sometimes called ‘pill-rolling’ – which can progress to the whole body. With Parkinson’s disease one minute you are working away in the garden and the next you are literally stuck to the spot – totally unable to move. In these situations daily life can become a challenge that can be difficult to endure.

The disease is named after a British surgeon and political activist James Parkinson (1755-1824) who was born in London’s east end. In October 1794 he was questioned under oath before a council of state in connection with a plot to kill the King. He was exonerated but remained a strong advocate for the under-privileged. In 1817 he published An Essay on the Shaking Palsy reporting 6 cases. Although his publication was later considered the seminal work on the disease, it received little attention until a lot more cases came to light.

Where in the brain does Parkinson’s disease occur?

The Nobel Prize was awarded in 2000 to Professor Arvid Carlsson for his research over the past 50 years which confirmed that the ‘core defect’ in Parkinson’s disease is a loss of a chemical called dopamine in two tiny brain regions  – no bigger than a wart – called the substantia nigra. These two regions deep in the back of the brain – one on the left side and one on the right side – contain nerves that make a lot of dopamine and release it at their tips about 4 inches forward in the basal ganglia – located deep in the center of the brain where it helps to convert the intention/motivation needed to perform a movement into actual movement.

The core defect is a loss of dopamine

Dopamine belongs to a family of neurotransmitters called amines that help nerve cells to stay in touch with each other- sometimes called neurotransmitters. Dopamine acts like hydraulic oil which lubricates the basal ganglia nerve network involved in executing a movement. One only needed to go to watch Linda perform on stage at the height of her career to see dopamine in action as her brain effortlessly converted her thoughts and moods into the mesmerizing tonality, rhythm and range that made her so loved by a generation. In Parkinson’s disease the substantia nigra progressively dies, the supply of dopamine to the basal ganglia dries-up and like a car out of oil the engine seizes-up and movement grinds to a halt.

We need dopamine to survive. Dopamine allows us to talk, sing, socialize, improvise and take risks. When dopamine flows we don’t see things as being limited by circumstance. We have boundless energy and literally anything is possible!  Without dopamine we feel trapped and disconnected. It is not surprising therefore that mood can become low and depression is often associated with this illness.

Over the past 40 years neuroscientists been working hard to develop drugs that can safely raise dopamine levels in the Parkinsonian brain – the so-called antiparkinsonian drugs – and better, more effective treatments come on the market every decade.  Drug treatments are effective in managing symptoms but frequent changes are needed as the disease progresses. In the end many combinations of drugs at higher and higher doses may be needed and unpleasant side-effects may become an issue. Medication costs on average €100,000 per year.  Interestingly, the inexpensive anti-inflammatory drug ibuprofen has recently been shown to help stave off Parkinson’s disease possibly by protecting the substantia nigra but ibuprofen can itself produce unwanted side effects, including stomach bleeding. 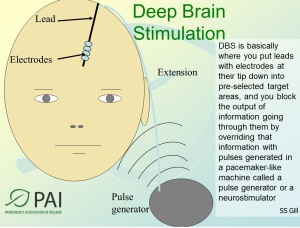 Neuroscientists believe that the loss of the dopamine-rich nerves in the substantia nigra results is an over-activity of a ‘brake’ mechanism in the basal ganglia which in turn inappropriately shuts down movement.  Deep brain stimulation (DBS) takes advantage of our knowledge of this brain wiring by applying a small electric current into a target area called the subthalamic nucleus located deep within the basal ganglia to switch off the brake and free-up movement. It is an expensive and risky procedure but it can provide a new lease of life particularly to those patients for whom conventional drug treatment no longer seem to work.

The politics of brain research

Probably the most important lesson to be taken from Linda’s illness is that we need to open up a debate on how we as a society fund research into brain illness and highlight the realization that a deeper understanding of the brain IS the difference between a good and a bad quality of life for the sufferers of brain illnesses such as Parkinson’s disease.

I hope that Linda and her loved ones will take hope from the on-going research into Parkinson’s disease by teams of dedicated scientists worldwide.

Click on the link below to hear Professor Billy O’Connor talk about Parkinson’s disease on Mind Matters – a science programme on RTE radio.