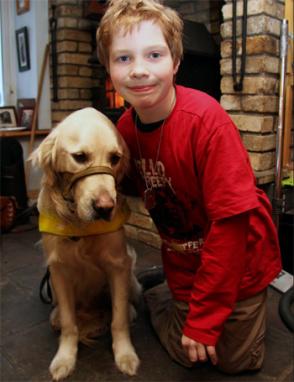 I was reading over the weekend of the case of the parents of a young boy with cerebral palsy, who have opted to educate their child at home after they were told his assistance dog was not welcome at his primary school. Luke Kelly-Melia who is in sixth class at Knocktemple National School in Virginia, Co Cavan, has been told his golden retriever, Aidan, is not allowed on the school grounds until further notice.

I am not up-to-speed on the full details of this case, but I do know that research in neuroeducation -the brain science of learning – shows that the value of a trained child-friendly dog in the classroom  may far outweigh the concerns raised by the School Board of Management.

A 2002 study [“Behavioural effects of the presence of a dog in a classroom,” Anthrozoös 16 (2), 2003], conducted by Kurt Kotrschal and Brita Ortbauer, took place in Vienna.

The research found that having a dog in the classroom actually decreased behavioural extremes, making the diverse group more homogenous. Children were less engaged in loud, conspicuous, or troublesome behaviour. They paid more attention to their teacher, cooperated better, and communicated more intensely with one another. Improvements in social behaviour were more pronounced in boys than in girls, perhaps because girls showed less boisterous, “rough-and-tumble” activity to begin with. The researchers also speculate that the teacher’s authority increased, particularly with respect to certain male students, in the presence of her compliant, obedient dog.

A spokesperson for The Department of Education said it is a “matter for the board of management of each school to develop a policy on whether guide dogs or assistance dogs were allowed in the school, taking account of the needs of all the children in the school”. I do hope the School Board of Management will revisit their decision in respect of Luke and Aidan, as the newspaper article appears to indicate they may do.