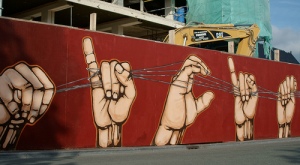 The brains of deaf people reorganize not only to compensate for the loss of hearing, but also to process language from visual stimuli—sign language, according to a study published  in Nature Communications. Despite this reorganization for interpreting visual language, however, language processing is still completed in the same brain region.

Our love of music and appreciation of musical harmony is learnt and not based on natural ability – a new study by University of Melbourne researchers has found.

For many patients with difficult-to-treat neuropathic pain, deep brain stimulation (DBS) can lead to long-term improvement in pain scores and other outcomes, according to a study in the February issue of Neurosurgery.

New brain imaging research from Carnegie Mellon University provides some of the first evidence showing how the brain unconsciously processes decision information in ways that lead to improved decision making. Published in the journal Social Cognitive and Affective Neuroscience, the study found that the brain regions responsible for making decisions continue to be active even when the conscious brain is distracted with a different task.

An interdisciplinary team of researchers has found a new way to influence the vital serotonin signaling system—possibly leading to more effective medications with fewer side effects.

Researchers at the University of Pittsburgh School of Medicine and UPMC describe in PLoS ONE how an electrode array sitting on top of the brain enabled a 30-year-old paralyzed man to control the movement of a character on a computer screen in three dimensions with just his thoughts. It also enabled him to move a robot arm to touch a friend’s hand for the first time in the seven years since he was injured in a motorcycle accident.

Researchers have discovered a molecule that accumulates with age and inhibits the formation of new neurons. The finding might help scientists design therapies to prevent age-related cognitive decline.

Wearing a nerve stimulator for 20 minutes a day may be a new option for migraine sufferers, according to new research published in the February 6, 2013, online issue of Neurology®, the medical journal of the American Academy of Neurology.