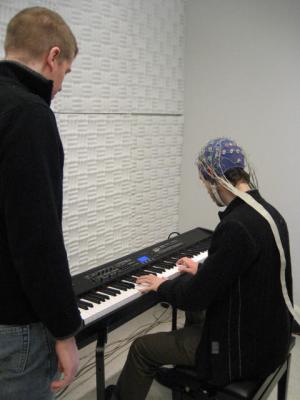 For the study, researchers recruited twenty skilled pianists from Lyon, France. The group was asked to learn simple melodies by either hearing them several times or performing them several times on a piano. Pianists then heard all of the melodies they had learned, some of which contained wrong notes, while their brain electric signals were measured using electroencephalography (EEG). Credit: Caroline Palmer/Brian Mathias

Research from McGill University reveals that the brain’s motor network helps people remember and recognize music that they have performed in the past better than music they have only heard.

Veterans who have been exposed to nearby explosions, but who lack clear symptoms of traumatic brain injury (TBI) may still have damage to the brain’s white matter similar to veterans with TBI, according to new research at Duke Medicine and the U.S. Department of Veterans Affairs.

University of Adelaide researchers say new insights into how the human brain responds to chronic pain could eventually lead to improved treatments for patients. And also at the University of Adelaide, studies show that a gene linked to intellectual disability is critical to the earliest stages of the development of human brains. Known as USP9X, the gene has been investigated by Adelaide researchers for more than a decade, but in recent years scientists have begun to understand its particular importance to brain development.

In order to function properly, the human brain requires the ability not only to store but also to forget. Through memory loss, unnecessary information is deleted and the nervous system retains its plasticity. A disruption of this process can lead to serious mental disorders. Scientists have now discovered a molecular mechanism that actively regulates the process of forgetting. The journal Cell has published their results.

Scientists have identified a new group of compounds that may protect brain cells from inflammation linked to seizures and neurodegenerative diseases.

Your brain’s ability to instantly link what you see with what you do is down to a dedicated information ‘highway’, suggests new research.

There has been a great deal of research on changes among different brain states during sleep, but  new findings, reported in the March 13 issue of Cell, provide a compelling example of a change in state in the awake brain.

Finally, this week, using a new method to determine whether individuals met the criteria for a clinical diagnosis of bipolar disorder, researchers from UCLA tried a new approach by combining results from brain imaging, cognitive tests, and an array of temperament and behavioral measures. In an attempt to better understand the genes that cause the disorder, a collaborative research team identified about 50 brain and behavioral measures that are both under strong genetic control and associated with bipolar disorder, creating the potential to pinpoint the specific genes that contribute to the illness. 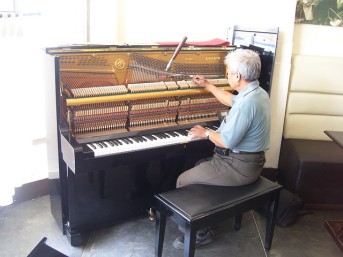 Scientists have shown that working as a piano tuner may lead to changes in the structure of the memory and navigation areas of the brain. The study, published in the Journal of Neuroscience, shows that these structural differences correlate with the number of years of experience a piano tuner has accumulated.

An unusual kind of circuit fine-tunes the brain’s control over movement and incoming sensory information, and without relying on conventional nerve pathways, according to a study published in the journal Neuron.

The reason we struggle to recall memories from our early childhood is down to high levels of neuron production during the first years of life, say Canadian researchers.

Researchers have identified mutations in several new genes that might be associated with the development of spontaneously occurring cases of the neurodegenerative disease known as amyotrophic lateral sclerosis, or ALS. Also known as Lou Gehrig’s disease, the progressive, fatal condition, in which the motor neurons that control movement and breathing gradually cease to function, has no cure.

The brains of people with depression show a reduced ability to adapt to their environment, a unique study shows.

Researchers at the Stanford University School of Medicine have found that a naturally occurring protein secreted only in discrete areas of the mammalian brain may act as a Valium-like brake on certain types of epileptic seizures.