Those who exercise regularly may lower their risk of developing anxiety by 60%, researchers report.

A study published in the journal Sleep shows that a deep neural network model can accurately predict the brain age of healthy patients based on electroencephalogram data recorded during an overnight sleep study, and EEG-predicted brain age indices display unique characteristics within populations with different diseases.

A new study reveals a correlation between instances of eye contact and higher levels of engagement during conversations.

Researchers have developed a deep learning-based method that can predict the possible onset of Alzheimer’s disease from brain images with an accuracy of over 99 per cent. The method was developed while analysing functional MRI images obtained from 138 subjects and performed better in terms of accuracy, sensitivity and specificity than previously developed methods.

Scientists in Japan have identified metabolic compounds within the blood that are associated with dementia.

New research published in Cortex provides evidence that a brain region known as the ventromedial prefrontal cortex contributes to cognitive biases in decision making. People with damage to this area of the brain often experience changes in personality and social behavior. But the new findings suggest that ventromedial prefrontal cortex damage can also make people more rational under some circumstances.

An immunological molecule called fractalkine can boost the production of brain cells that produce myelin, a key factor in diseases such as multiple sclerosis, according to recent research from the University of Alberta.

According to two studies conducted in Serbia during the COVID-19 lockdown, elite athletes and individuals who engaged in vigorous levels of exercise demonstrated the lowest psychological distress during this time. The findings, published in Frontiers in Psychology, further underscored the importance of adaptability, showing that athletes who reduced their training schedules during the early stages of lockdown showed lower distress than those who maintained them.

Finally this week, a new AI algorithm can predict the onset of Alzheimer’s disease with an accuracy of over 99% by analyzing fMRI brain scans.

New research reveals that neurons in the visual cortex—the part of the brain that processes visual stimuli—change their responses to the same stimulus over time.

Menopause can mess with your memory, and a new study has identified four profiles of cognitive function that may help researchers understand why memory declines for some women and not others. This adds to the mounting evidence of the memory changes that can happen when menopause approaches and could lead to better guidance and treatment for patients experiencing memory issues.

Testing for some inflammatory proteins associated with the nervous and immune systems will help diagnose the earlier onset and progression of Alzheimer’s disease, according to a Rutgers study.

A new study explores a new non-dopamine reward circuitry in the brain.

An analysis of data from 1.5 million people has identified 579 locations in the genome associated with a predisposition to different behaviors and disorders related to self-regulation, including addiction and child behavioral problems.

Scientists have long suspected that religiosity and spirituality could be mapped to specific brain circuits, but the location of those circuits remains unknown. Now, a new study using novel technology and the human connectome, a map of neural connections, has identified a brain circuit that seems to mediate that aspect of our personality.

Finally this week, researchers reveal the neurobiological basis of why we often find it more difficult to find the right words as we age.

Short naps of up to 60 minutes in duration do not mitigate the effects of a night of sleep deprivation, a new study reports. However, the amount of slow-wave sleep achieved during a nap was related to reduced impairments associated with sleep deprivation.

30% of people reported changes in cognition, memory, and problems with information processing as a result of social isolation caused by pandemic lockdowns.

Some proteins in cells can separate into small droplets like oil droplets in water, but faults in this process may underlie neurodegenerative diseases in the brains of older people. Now, Rutgers researchers have developed a new method to quantify protein droplets involved in these diseases.

A new study reveals how dopamine may have a central role in maintaining our consciousness.

It’s long been known that opioid overdose deaths are caused by disrupted breathing, but the actual mechanism by which these drugs suppress respiration was not understood. Now, a new study by Salk scientists has identified a group of neurons in the brainstem that plays a key role in this process.

A recent experimental study shows how regular physical exercise modulates iron metabolism in both the brain and the muscles. The findings also help to better understand the benefits of exercise in Alzheimer’s disease.

A new AI model can accurately classify a brain tumor of one of six common cancer types from a single MRI brain scan image.

A tiny region in the middle of the brain plays a far more important role than previously known in helping it respond to changes in the environment, a new study shows.

The brain’s white matter pathway organization during the first year of life may predict language acquisition and development at age five, researchers say.

Finally this week, mindfulness may provide modest benefits to cognition, particularly among older adults, finds a new review of evidence.

A new algorithm that combines naturalistic driving data with machine learning is 88% accurate at predicting mild cognitive impairment and dementia in older adults.

People with schizophrenia and other neuropsychiatric disorders may have a more permissive blood-brain barrier which allows the immune system to become more actively involved in the central nervous system. The resulting inflammation may contribute to the clinical manifestation of psychosis-like symptoms.

Mindfulness programs can improve the mental health of school-age children and help them to feel more optimistic, according to new research.

A new study finds evidence of inflammation in the blood of patients during the early stages of Parkinson’s disease. The findings support the theory that inflammation is a driver of the neurodegenerative disorder. The effect was most noticeable in women with Parkinson’s.

Researchers propose a new theory of what happens in the brain when we experience familiar seeming visual stimuli. The theory, dubbed sensory referenced suppression, suggests the brain understands different levels of activation expected for sensory input and corrects for it, leaving behind the signal for familiarity.

A multidecade study of young adults living in the United Kingdom has found higher rates of mental illness symptoms among those exposed to higher levels of traffic-related air pollutants, particularly nitrogen oxides, during childhood and adolescence.

The brain encodes information about our relationships and the relationships between our friends using areas involved in spatial processing, according to new research published in Journal of Neuroscience. 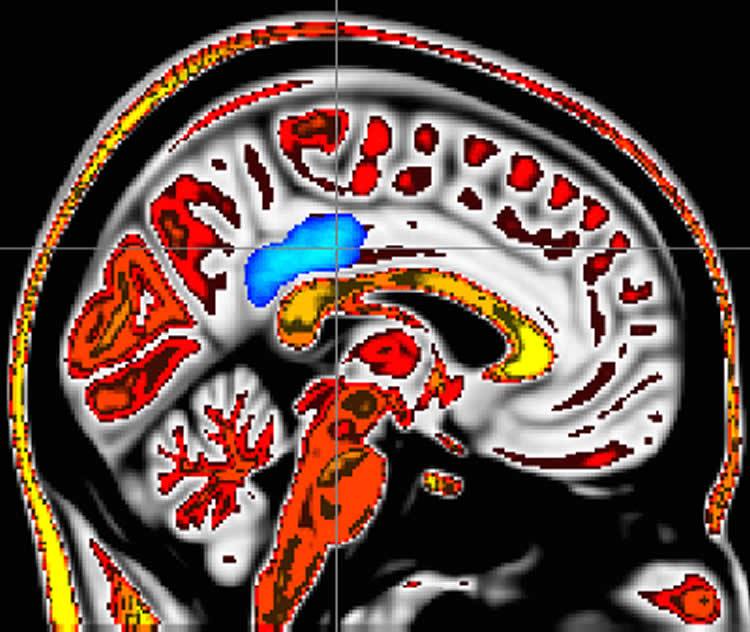 Whole brain analyses revealed that higher dispositional mindfulness during painful heat was associated with greater deactivation of a brain region called the posterior cingulate cortex, a central neural node of the default mode network. Further, in those that reported higher pain, there was greater activation of this critically important brain region. image is credited to Zeidan et al.

Ever wonder why some people seem to feel less pain than others? A  new study may have found one of the answers – mindfulness.

A new study reveals elevated glial activation in the brains of those with fibromyalgia.

Brains of baby boys born prematurely are affected differently and more severely than premature infant girls’ brains. This is according to a study published in the Springer Nature-branded journal Pediatric Research.

According to researchers, the speed at which a person speaks influences the way we hear and understand upcoming words.

A new study reports under conditions of stress, KCNB1 builds up in the brain, before becoming toxic and promoting the production of amyloid beta. In Alzheimer’s patients, the KCNB1 levels are higher than in those without the condition.

Researchers report pyramidal neurons in the basolateral amygdala help us to recognize and categorize foods.

Finally this week, researchers report on how the brain learns to recognize an individual face, regardless of where it appears in different visual locations. 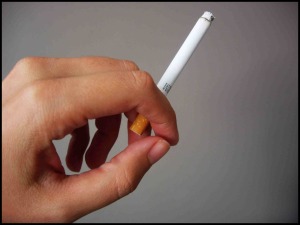 How does cigarette addiction affect the brain?

The effects of nicotine upon brain regions involved in addiction mirror those of cocaine, according to new neuroscience research.

Aspirin and other anti-inflammatory drugs taken for pain relief may reduce the effectiveness of anti-depressants such as Prozac, say US researchers.

Moments of absent mindedness such as losing your keys could be the result of tiny parts of the brain taking “naps” to recharge, a study finds.Researchers discovered that contrary to popular opinion the brain is not always entirely asleep or awake but parts of it can go “offline”.

Neuroscientists at the California Institute of Technology and their colleagues have tied the human aversion to losing money to a specific structure in the brain-the amygdala.

Music is not only able to affect your mood — listening to particularly happy or sad music can even change the way we perceive the world, according to researchers from the University of Groningen.

The positive effects of mindfulness meditation on pain and working memory may result from an improved ability to regulate a crucial brain wave called the alpha rhythm. This rhythm is thought to “turn down the volume” on distracting information, which suggests that a key value of meditation may be helping the brain deal with an often-overstimulating world. And in other  mindfulness research – fMRI shows how mindfulness meditation changes the decision making process 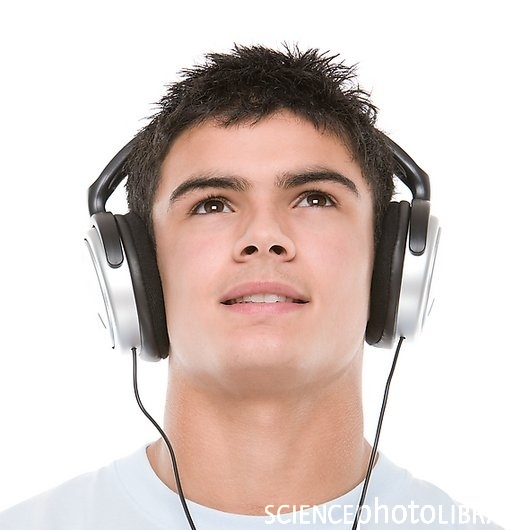 Research shows that our brains understand music not only as emotional diversion, but also as a form of motion and activity.

Research shows that our brains understand music not only as emotional diversion, but also as a form of motion and activity. The same areas of the brain that activate when we swing a golf club or sign our name also engage when we hear expressive moments in music. Brain regions associated with empathy are activated, too, even for listeners who are not musicians.

And still on the theme of music and the brain, a recent study of seventy healthy adults ages sixty to eighty-three with various levels of music education starting around the age of ten showed impressive differences in brain functioning far later in life than any other research has previously shown.

A new study has suggested that sustained training in mindfulness meditation may impact distinct domains of human decision-making, enabling them to make decisions rationally.

Older bilingual adults compensate for age-related declines in brainpower by developing new strategies to process language, according to a recent study published in the journal Aging, Neuropsychology, and Cognition.

Finally, here is an interesting post from Chris Mooney on the science of why we don’t believe science.