Visual and auditory stimuli that elicit high levels of engagement and emotional response can be linked to reliable patterns of brain activity, a team of researchers reports. Their findings could lead to new ways for producers of films, television programs and commercials to predict what kinds of scenes their audiences will respond to.

Implants that deliver pulses of light into the brain could lead to new treatments for diseases such as epilepsy and Alzheimer’s Disease.

Post traumatic stress disorder (PTSD) is a severe type of anxiety disorder that can occur after an individual experiences a traumatic event. However, at present, doctors are unable to predict who will develop these disorders. Now, a new study seeks to identify individuals who are more susceptible to long-standing disorders if exposed to a traumatic event.

Researchers have discovered how a part of the brain helps predict future events from past experiences. The work sheds light on the function of the front-most part of the frontal lobe, known as the frontopolar cortex, an area of the cortex uniquely well developed in humans in comparison with apes and other primates.

Fish cannot display symptoms of autism, schizophrenia or other human brain disorders. However, a team of MIT biologists has shown that zebrafish can be a useful tool for studying the genes that contribute to such disorders.

Johns Hopkins researchers say they have discovered one of the most important cellular mechanisms driving the growth and progression of meningioma, the most common form of brain and spinal cord tumor. A report on the discovery, published in the journal Molecular Cancer Research, could lead the way to the discovery of better drugs to attack these crippling tumors, the scientists say.

Researchers have furthered understanding of the mechanism by which the cells that insulate the nerve cells in the peripheral nervous system, Schwann cells, protect and repair damage caused by trauma and disease. 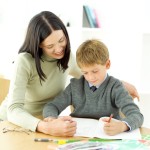 In my previous neuroeducation post, I briefly outlined the latest scientific research which shows that learning actually changes the shape of the brain, allowing specific areas in the brain to grow or change and how most importantly this brain growth can be accelerated to improve learning and memory using certain approaches to teaching.

Today let’s take a look at one of these conditions in more detail.

Research has shown that children with dyslexia suffer from two specific problems: trouble analyzing and processing sound (phonology) and difficulties with rapid naming of objects.

Early intervention particularly with phonological therapies – before the child gets into trouble in school – appears to prevent dyslexia. The old idea was that dyslexia was somehow a hole in brain – a mental deficit – is not the case. These children appear to be just on the low end of an ability to learn to read instead of having some problem in their brains in much the same way as those children who find difficulty learning a musical instrument.

The problem for dyslexic children is that unlike learning a musical instrument, learning to read is regarded by society as an essential skill – thus putting these kids on the back foot.  The good news is that early detection and treatment for dyslexia is available and better and more effective treatments are being developed as we speak.