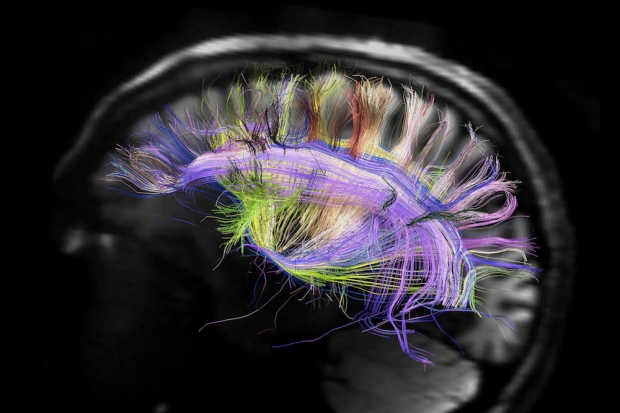 MRIs work by aligning the magnetic spin of the hydrogen molecules in the body. Credit: Image courtesy of MGH-UCLA Human Connectome Project.

Brain scans are now starting to peer down to the molecular level, revealing what brain cells are telling one another, researchers say.

A new study has provided insight into the behavioral damage caused by repeated blows to the head. The research provides a foundation for scientists to better understand and potentially develop new ways to detect and prevent the repetitive sports injuries that can lead to the condition known as chronic traumatic encephalopathy (CTE).

Sufferers of a common sleep-breathing disorder have diminished activity among neurons responsible for keeping heart rate low, reveals a new study published in The Journal of Physiology. The research discovered that in obstructive sleep apnoea (OSA), neurons in the brainstem that control heart rate experience a blunting of their activity. The reduction of neuronal activity likely contributes to the increased heart rate,blood pressure and risk of adverse cardiovascular events that occur in patients with OSA.

A variant of the gene KLOTHO is known for its anti-aging effects in people fortunate enough to carry a copy. Now researchers have found that it also has benefits when it comes to brain function.

Humans who lack the corpus callosum, a bundle of 200 million fibers that connect the left and right hemispheres of the brain, have long fascinated physicians, neuroscientists and other curious minds. Now, a group of researchers puts an end to the Sperry’s paradox, which describes major differences between individuals born with reduced or absent brain connections and those who acquire this condition later in life.

A study has shown that a long-overlooked form of neuron-to-neuron communication called miniature neurotransmission plays an essential role in the development of synapses, the regions where nerve impulses are transmitted and received.

The way that your heart rate increases in response to alertness in the brain has been recently discovered by researchers. Specifically, this study looked at the interactions between neurons that fire upon increased attention and anxiety and neurons that control heart rate to discover the “why,” “how,” and “where to next” behind this phenomenon. The results may have important implications for how certain conditions are treated in the future, such as post-traumatic stress disorder, chronic anxiety, or even stress.

A growing body of evidence suggests nonhuman animals can group living and inanimate things based on less than obvious shared traits, raising questions about how creatures accomplish this task.

Researchers at the University of Liverpool found musical training can increase blood flow in the left hemisphere of the brain, suggesting the area of the brain responsible for music and language share common pathways.