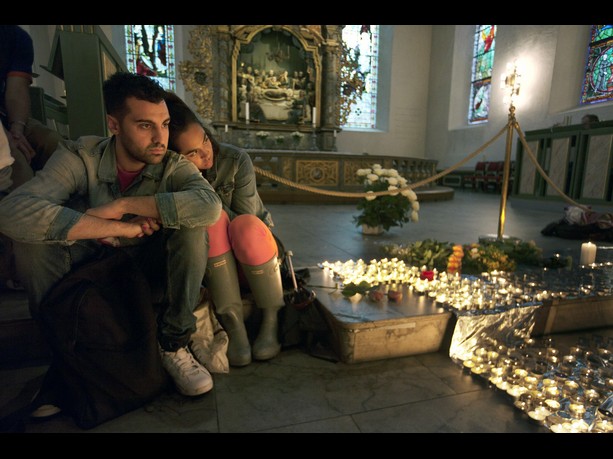 Along with so many of you, I was horrified this week to hear of the despicable attack of Anders Behring Brevik on the people of Norway. In his rambling 1500-page manifesto and instruction manual for would-be “crusaders” against Islam and liberal European politicians, Brevik describes how he will be on a “steroid rush” in the midst of the attack. In fact, the manifesto describes the extensive use of steroids and protein drinks to provide him with more energy and one point he writes that he wishes he could obtain “aggressiveness pills.”  I believe that Brevik’s abuse of steroids provides a hint to understanding his behaviour.

Steroids are dangerous drugs, and when used inappropriately, they can cause serious behavioural and psychiatric problems – possibly by interfering with the brain’s ability to regulate a hormone called vasopressin – which is linked to aggression1.  Research has shown that the inappropriate use of anabolic steroids – man-made versions of the male sex hormone testosterone – can have catastrophic behavioural consequences including aggression (also known as roid rage or the “steroid rush” mentioned in Brevik’s manifesto) such as fighting, physical and sexual assault, armed robbery and property crimes such as burglary and vandalism.  The full-blown aggression can last for up to two weeks after withdrawal. As if this is not bad enough, the psychiatric consequences of inappropriate use of anabolic steroids include jealousy, irritability, deluded thinking, mood swings and bad judgement due to a feeling of invincibility.  Why would anyone even dream of taking such a drug – I hear you ask?

The upside of anabolic steroids

Anabolic steroids are powerful body-building drugs. They promote rapid growth of muscle bone, the larynx (voice box) and a decrease in body fat leading to increased strength and endurance. For this reason anabolic steroid abuse is widespread among athletes, bodybuilders, weightlifters and football players at all levels. However, in this case anabolic steroids are taken to simply replace the discipline required for the long hours of training needed to build up more muscle – as nature intended – and are thus a “shortcut” to an athletic body. These bulking-up effects of steroids on muscle can boost confidence and strength leading the abuser to overlook the potential serious long-term damage that these substances can cause. These drugs are also abused by people who believe that they look underweight, are the wrong shape, to stop being bullied, beaten up or sexually attacked.

Anabolic steroids are very effective in treating conditions such as delayed puberty, some types of impotence, body wasting in patients with AIDS, and other diseases that occur when the body produces abnormally low amounts of testosterone. However, the doses prescribed to treat these medical conditions are 10 to 100 times lower than the doses that are abused for performance enhancement usually by some athletes, nightclub bouncers and others interested in beefing-up their muscles.

Why are anabolic steroids addictive?

By enhancing certain types of performance or appearance anabolic steroid abuse is increasing in adolescents and most rapidly among females. Abuse of anabolic steroids differs from the abuse of other illegal drugs because the initial use of anabolic steroids is not driven by the immediate euphoria that accompanies most drugs of abuse, such as cocaine, heroin, alcohol and marijuana, but by the desire of the abuser to change their appearance and performance, characteristics of great importance to adolescents and young adults.

They can be taken orally (by mouth) as tablets or capsules (Anadrol® [oxymetholone], Oxandrin® [oxandrolone], Dianabol® [methandrostenolone], Winstrol® [stanozolol], and others), by injection into muscles (Deca-Durabolin® [nandrolone decanoate], Durabolin® [nandrolone phenpropionate], Depo-Testosterone® [testosterone cypionate], Equipoise® [boldenone undecylenate], and others) or by ointment preparations rubbed into the skin and are often taken together with drinks rich in protein – the building blocks of muscle.  Health food supplements such as dehydroepiandrosterone (DHEA) and androsterone (street name Andro) are not anabolic steroids.

Anabolic steroids are legally available only on prescription and for the illegal market are manufactured in illegal laboratories (poor quality), smuggled in from other countries or stolen from hospitals and pharmacies. One of the hallmarks of addiction is an inability to control drug intake and anabolic steroid abuse is no exception to this. Abusers use two ways of maximizing the effect of the drug on muscle growth – stacking and pyramiding. Both can cause very high levels of steroids to accumulate quickly in the body resulting in acute behavioural and psychiatric problems such as the controlled rage or “steroid rush” described by Brevik.

Stacking is the term used when abusers take two or more anabolic steroids together, mixing oral and/or injectable types, sometimes adding drugs such as stimulants (caffeine, nicotine) or painkillers (codeine, morphine, heroin, diazepam).  Stacking is thought to produce a greater effect on muscle size than could be obtained by simply increasing the dose of a single drug.

In a separate procedure called pyramiding at the beginning of a cycle, the abuser starts with low doses of the stacked substances – gradually increasing the doses for 6 to 12 weeks.  In the second half of the cycle, the doses are slowly decreased to zero.  This is followed by a second cycle during which the person continues to train, but without drugs. Abusers believe that pyramiding allows the body time to adjust to the high doses, and the drug-free cycle allows time for the body’s natural hormonal system to recover.

Inside the enraged brain of Anders Baring Brevik

Brevik carefully planned his terrible crime suggesting that while he took care of his physical body and noticed the interest females took in his appearance he abused anabolic steroids probably for the psychological effects – to fuel his jealousy and irritability with Islam and liberal European politicians, and for the controlled rage or “steroid rush” required in the midst of his attack. Individuals who abuse steroids can experience prolonged withdrawal symptoms (up to one year), the most dangerous of which is depression, because it sometimes leads to suicide attempts. So it’s no surprise that Brevik has been put on suicide watch and will be for some time to come.

Life is not just about winning

A key lesson to be taken from this appalling tragedy is the importance of encouraging youths to avoid anabolic steroid abuse. However, most adolescents already know that anabolic steroids build muscles and can increase athletic prowess and a failure to acknowledge these potential benefits creates a credibility problem and can actually make youths more likely to try the drugs.  Young people need to see the benefits of working with what nature has provided – such as the importance of proper nutrition and exercise and other techniques for improving performance – and not “cheat” by using steroids and thereby exposing themselves to the negative side-effects associated with these drugs.  Participating in sports offers many benefits, but young people and adults shouldn’t take unnecessary health risks in an effort to win.  By giving a balanced picture of what these drugs can do for you and to you I hope that this blog post will help in those prevention and education efforts by reaching young people, their parents, and others who may think that anabolic steroids are a harmless way to ‘bulk up’ or achieve athletic goals.

What can we learn from the actions of Anders Baring Brevik?

Probably the most important lesson to be taken from this appalling tragedy is the realization that the stresses of life and how we manage them IS the difference between life and death. We also need to support research that increases our understanding of the impact of steroid abuse and improve our ability to prevent abuse of these drugs, but also promote other healthy behaviours and attitudes. I look forward to developing this theme in greater detail including drug-free tips on how to manage anger and stress in future posts, but in the meantime, my deepest sympathy goes to the victims’ loved ones and to all the people of Norway at this difficult time.

For those interested in the topic of steroid abuse more information can be found at: